The jewellery firm TOUS launched a campaign on Valentine’s Day for its Facebook fans in Spain, Portugal, Mexico and the USA at the same time, as well as another one for customers of their physical stores in Spain. The campaign enabled them to reach 13,000 participants. The competition for their Facebook followers was a fun trail around their various channels. It consisted of going to the TOUS Facebook page for your country and following the clues they posted on previously announced days. Participants then had to decipher these clues in order to find a key on the TOUS site that would, in turn, reveal to them a code which they used to enter the competition. The first person to enter the code would get one of the six keys that were on offer.

Meanwhile, for the competition in their physical stores in Spain, customers simply had to enter the code that they had been given in the store when making their purchase. A draw was held for all participants with four TOUS pendants to be won. This draw took place using the Instant Win feature, so participants could find out immediately if they had won or not.

We found the idea of using personalised codes very interesting and it was very popular among their followers, who followed the competition day after day, waiting for the different clues that would lead them to the key. We were thus keen to learn more about how they came up with the idea for this international campaign and what TOUS has in mind for the coming months on social networks. Here you have all the keys. 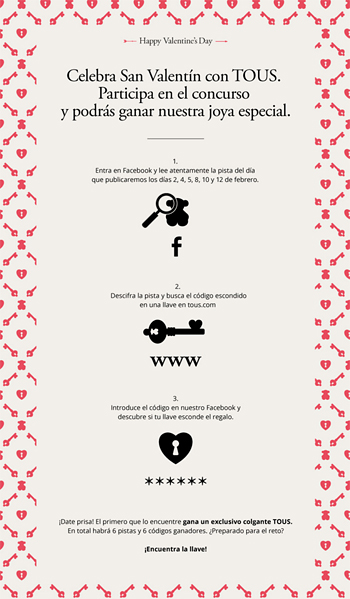 TOUS is a brand which has a presence all over the world, both in physical stores and on online channels, so presenting a campaign with an international presence and combining both channels is a must for us.

For this Valentine’s Day, we designed a special jewel in the form of a key, ready to open the hearts of all our #TousLovers. The idea was thus based on that jewel, on the key, and we created an original and fun ‘guerrilla’ competition for our fans to find hidden keys in our eShop, which hid great gifts. The result surprised us and we were delighted with it.

How important are social networks and specifically Facebook for TOUS?

For TOUS, social networks represent an exceptional way to establish a direct, and above all bidirectional, communication with our fans. It is so important to us that we have even come up with a name for them: our #TousLovers.

In the case of the Valentine’s Day campaign, the special jewel became an object of desire for many and there were waiting lists to get it. Broadcasting the items, involving the fans and creating quality content with them in mind is the best way to communicate.

What is the strategy you use to attract new followers, on the one hand, and to build loyalty and commitment to the brand, on the other?

Communicate quality content, always thinking about our customers and what they want to see, offering exclusive content and scoops for our #TousLovers

Do you plan to carry out similar campaigns in the future? Would you opt for a dynamic similar to the one you proposed for Valentine’s Day or would you choose another type of campaign, such as a photo contest, videos, a quiz, etc.?

We like to innovate and create new dynamics, so as to always offer our fans a unique experience on our networks. So I’m sure we’ll find new ways to conduct campaigns with Cool tabs.

What details do you have in mind when presenting a new campaign for your followers on social networks?

Our goal is to cater to them and provide a unique, cute and fun experience, in keeping with the TOUS brand.

Are the campaigns helping you to create more awareness of the different items TOUS’ offers?

Yes. In the case of the Valentine’s Day campaign, the special jewel became an object of desire for many and there were waiting lists to get it. Broadcasting the items, involving the fans and creating quality content with them in mind is the best way to communicate.

Do you have any priority objective that you would like to achieve in the digital/social media realm?

Continue to grow and share exclusive and quality content. The #TousLovers international community on social networks is made up of more than two million fans, and we love to keep growing.

What feature of Cool Tabs would you like to highlight? What do you think our services have helped you with?

The quality of the platform, the personalised service and the solution of potential problems, the ease of use and the human touch of your team are all excellent!

Launch your campaign with us >>

Have a look at other Case Studies >>