Cool Promo is our application that can also be used to create promotions and contests in Twitter. The way it works is particularly easy, since the only thing users need to do in order to participate is to accept the app permissions and start tweeting around. Asking participants to add a hashtag, or a reference to the brand is a very good idea. You can also ask them to upload a picture or a video. Don’t forget that a tweet is much more useful than you can imagine and it can get you very far.

You might have seen other kinds of promos in Twitter, but Cool Promo is one of the few applications respecting participants’ data protection rights, since any users willing to participate must accept the contest’s legal terms when filling in the participation form. This means that you can have access to participants’ details, such as their names and email addresses.

What does this mean? It means that if you have already created a Cool Promo, the steps you need to follow are exactly the same. However, there are a number of special features related to Twitter and the way posts are published in or outside of Facebook, which we explain in detail below. If this is the first time you are involved in something like this, keep the following tutorial handy, as we will start basing our explanations on it: Create your first Cool Promo.

What changes in the way you create the promotion?

Only if you decide to post it on Facebook, you will have to bear in mind the following points referring exclusively to publications on this social network:

If you decide to post it on the url that Cool Tabs provides you, it can be very useful that, once you’ve set the promotion and is everything correctly, you generate the URL for the preview for customers in the side menu of the preview (only available for Cool Promo White Label). With this URL, your customers will be able to see the promotion or competition before it’s public.

This url can also be used in Twitter competitions posted on Facebook, but is less important, since you can post it on Facebook without activating it, that is, only managers can see it and, as the customer usually is fan page administrator, they can access the promo before it is visible to everyone and request the necessary changes, if any. However, when the Instagram competition is posted on an external url provided by Cool Tabs, the only way to show it to the customer is this.

3. The ‘Integration with of your campaign Twitter’ section is where the requirements are specified to participate with this social network.

Previously on first section entitled ‘Access to the promotion,’ you will have to choose at least Twitter, as a social network that will allow the users to participate in your campaign. 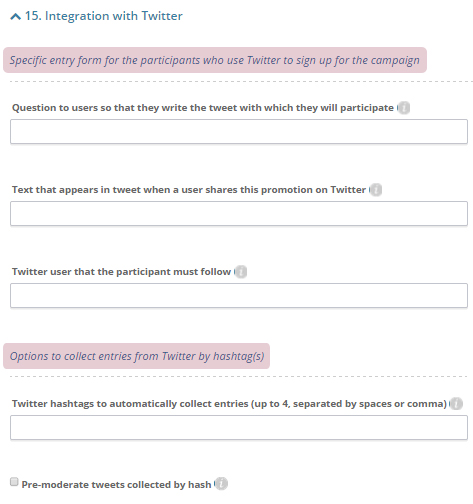 In this section you can set the following actions:

And that’s all. Our Twitter competition is as easy as that. Remember that you can ask participants to upload a photo or a video.

Twitter competitions can be created with Cool Promo and Cool Promo White Label. As it is the case in other applications, you can make the most of the advantages of our White Label using the last one. Moreover, to help you know about the evolution of your Twitter profile thanks to the campaign you create, we store your track record of followers, that you just can request it by contacting us.

Do you want to see what it would look like? Here is the example we’ve created: Twitter Contest Example.