If you think that the San Diego Comic-Con is just an international convention about comics, you know nothing  [Jon Snow] . This meeting gathers the Eisner Awards, the Oscars of comics,  and the International Masquerade, a huge cosplay contest. But not only that, you can also find all about fantastic and Sci-Fi series and movies.  In addition, it is visited by famous actors and it is the date chosen by many production companies to release the most important trailers of the year.

Cool Tabs has monitored the event on Social Media on Twitter and Instagram. We have analyzed the hashtags #SDCC and #SDCC2017, which have been the ones with a bigger traffic. The period of the study is July 19-24, from the day before until the day after the San Diego Comic-Con (July 20-23).

More than 1.5 million tweets about the San Diego Comic-Con

The trend was that the number of retweets greatly overcame the number of original tweets. The moment with most tweets per minute took place at 12:35 am on July 22 with 200 tweets/minute, with the hashtag #SDCC. Additionally, the hour with most tweets was at 12:00-1:00 pm of the same day, with nearly 6,000 tweets/hour.  This moment coincided with the premiere of the brand new trailers of the Warner Bros Pictures movies Justice League and Aquaman.

Nevertheless, the moment with most retweets per minute occurred at 6:28 pm, with 1,610 retweets/minute. From 6:00 pm until 7:00 pm, almost 55,000 retweets were made. In that moment, people at Hall H were watching the trailers of the upcoming Marvel movies. The most expected were probably The Avengers: Infinity War and Thor: Ragnarok. 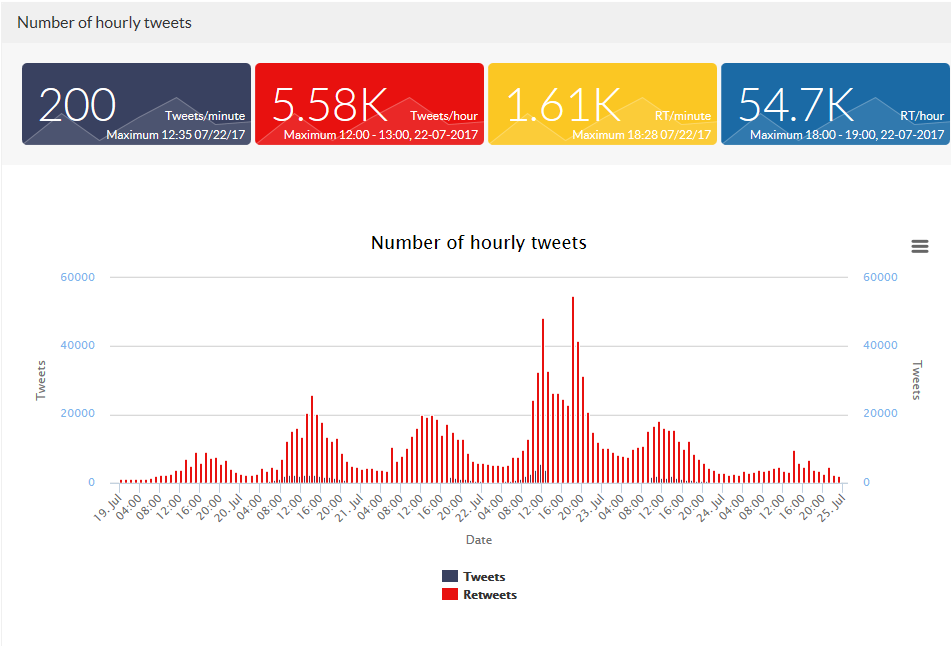 The fans were excited about the new movie releases and Twitter was the place where they checked the information. In such a way, the most tweeted words were: panel, san, diego, trailer, time, today, hall…. 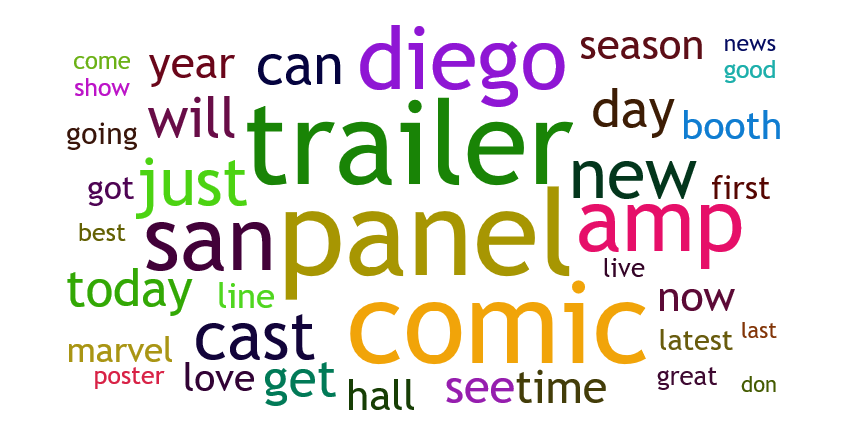 Many people seemed to be waiting for the guy with the hammer. The most retweeted tweet of the analyzed period was the one about the premiere of the Thor: Rangnarok trailer, written by the official accounts related to the movie (@thorofficial, @Marvel and @m+MarvelStudios). The tweets by the profile @Funko, with information about how to participate in several sweepstakes, were also very successful.

The most used hashtags, apart from the ones previously analyzed, were  #SDCC17, #ComicCon, #ComicCon2017, #Marvel, #MarvelSDCC, #WBSDCC (by Warner Bross) and #HallH, as well as the official hashtags related to every official release. Among these, the most popular were #JusticeLeague, #Avengers, #Thor (or #ThorRaganarok), #DoctorWho, #StrangerThings and #Arrow. 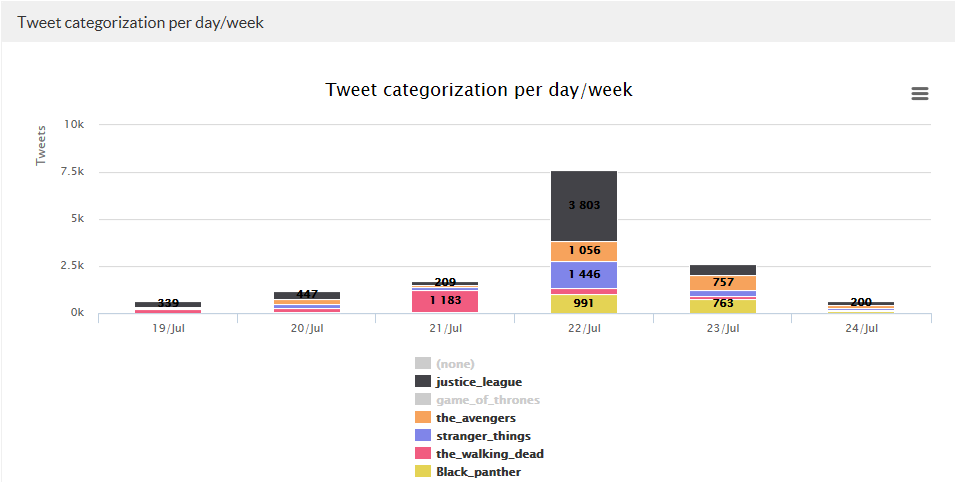 The ranking of users with more followers using the San Diego Comic-Con hashtags is topped by @ConanOBrien, former television host of The Tonight Show. He’s followed by the rapper @SnoppDogg, who shared an image with information about an upcoming conversation about diversity in the comic world. 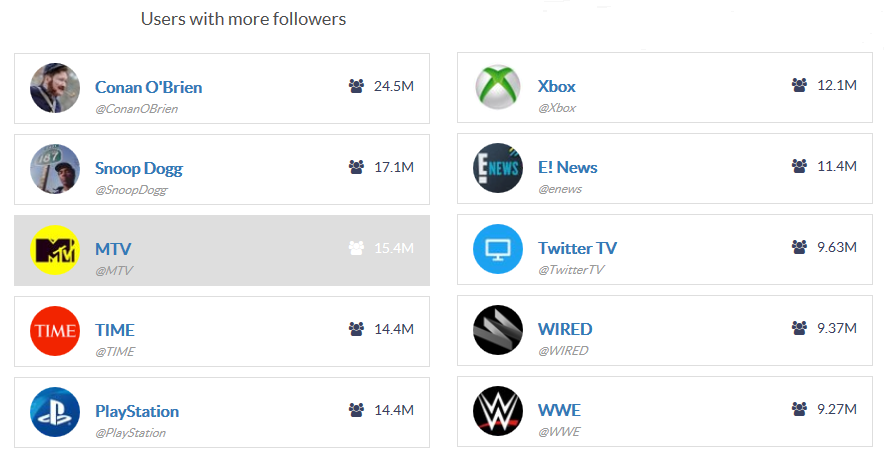 Media channels, such as @MTV , @Time, @enews or @Wired, also made use of the hashtag to make themselves part of the event. @PlayStation and @Xbox were also among the most followed accounts using the hashtag #SDCC.

Around 2,550 posts/hour were made at the peak moment (1:00pm – 2:00pm, July 22). This is a reflection of what happened on Twitter. Nevertheless, the posting average remained steady in the four days of the convention. 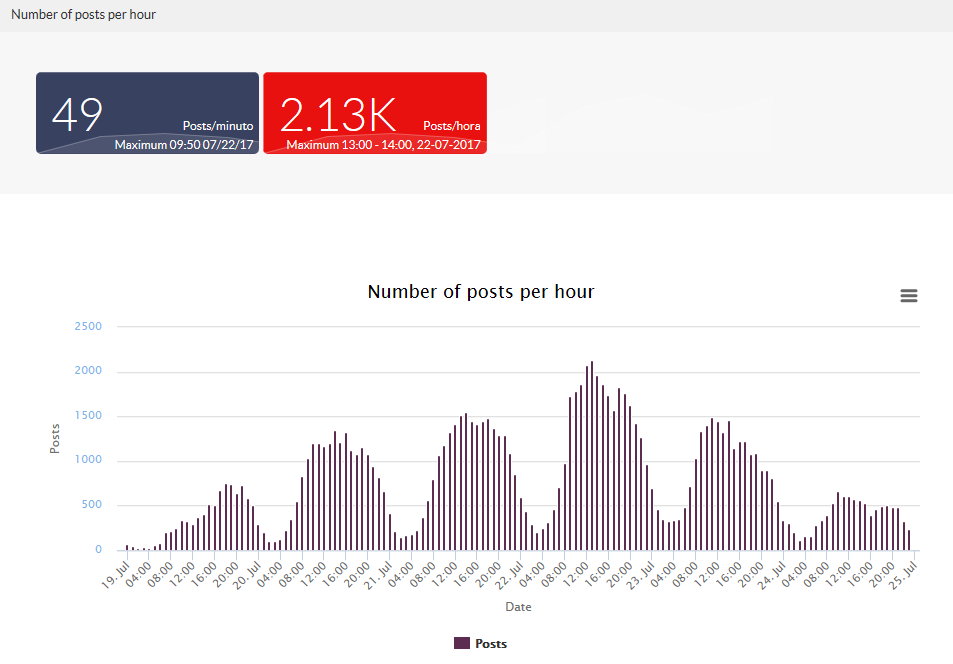 Instagram users of #SDCC tweeted from more than 100 countries, mainly from the United States. Among the top potential contributors, we can find @marvel, @disney, @mtv, @thenikkybella, @wwe, @starwars, @amcthewalkingdead or @callofduty.

The hashtag #SDCC has not been alone here. Almost 100,000 hashtags have been used along with it. The main ones are quite similar to those written on Twitter: #SDCC2017, #comiccon, #sandiego, #sandiegocomicon, #marvel… We can also find the hashtag #cosplay in the analysis, as Instagram is focused on photo content. 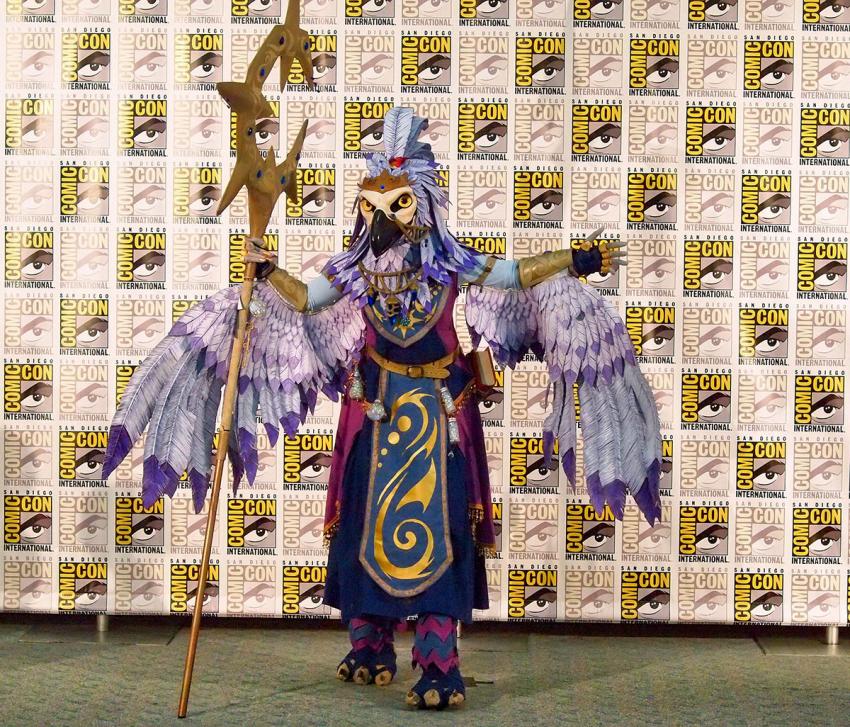